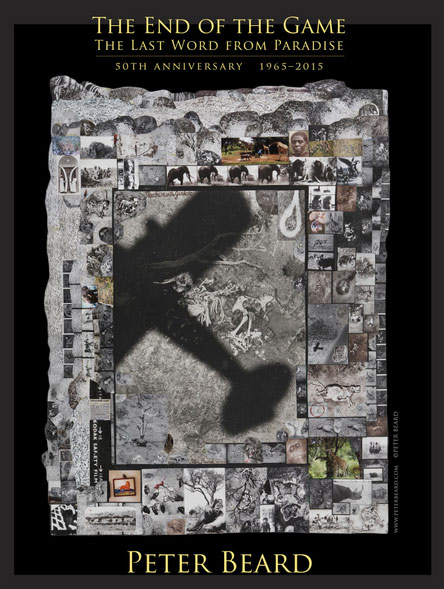 Over four months, Orin Langelle photographed Beard and the people, many celebrities, that were part of Beard’s life prior to and during the exhibit’s installation and the subsequent opening, plus Beard’s 40th birthday party at Studio 54 in January of 1978.

Langelle’s photographs are of events surrounding Beard’s 1977’s The End of the Game – The Last Word from Paradise. The ICP installation consisted of Beard’s photographs, elephant carcasses, burned diaries, taxidermy, African artifacts, books and personal memorabilia. In the early 60s Beard worked at Kenya’s Tsavo National Park, during which time he photographed and documented the demise of over 35,000 elephants and 5,000 Black Rhinos.

Langelle’s work at the International Center of Photography gave him a rare insight into Beard, whose controversial views on ecology then, are just as relevant today.

With the support of the Peter Beard Studio, ¡Buen Vivir! presents this exhibition to commemorate the 50th anniversary of Beard’s book, The End of the Game – The Last Word from Paradise.

¡Buen Vivir! Gallery, 148 Elmwood Avenue, Buffalo, NY
The ¡Buen Vivir! Gallery was founded to present an historical look at movements for change, struggle and everyday life. It is designed to counter the societal amnesia from which we collectively suffer—especially with regard to the history of social and ecological movements and issues, and to inspire new generations to participate in the making of a better world.
The name of the gallery, ¡Buen Vivir!, is a concept stemming from Indigenous and other cultures of the Southern Americas. ¡Buen vivir! means life in harmony between humans, communities, and the Earth–where work is not a job to make others wealthier, but for a livelihood that is sustaining, fulfilling, and in tune with the common good.